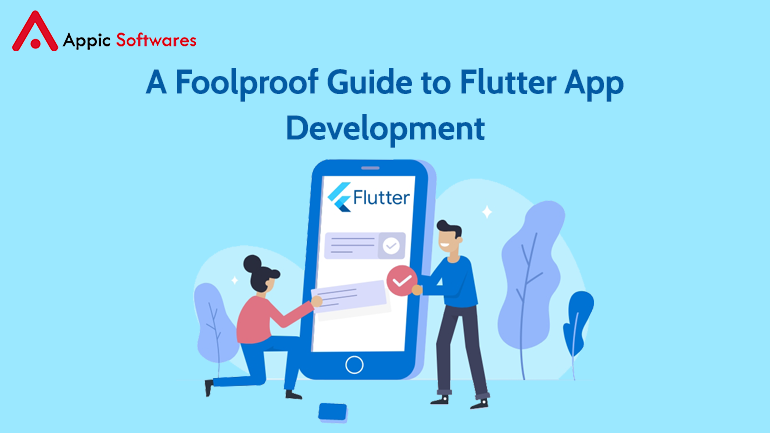 With mobile apps becoming an important part of our life, the number of apps launched on an Android platform has grown to over 100 thousand per month, apart from 30,000+ iOS releases. Many businesses have extensive experience doing Flutter app development as development services have become even more accessible to smaller companies, but a large number of apps still fail. It is a point to note that the chosen technology of your choice can also turn out to be a great success factor for you. Also, choosing a language or framework that doesn’t perform well decreases your chances of success.

Our choice is Flutter app development, which has proven to be the ultimate toolkit for a cross-platform UI for mobile, web, and desktop applications. Flutter is a technology used by smaller companies and also larger brands such as Alibaba.com, Abbey Road Studios, and The New York Times. We prefer Flutter to these alternatives because it allows us to develop aesthetically pleasing apps in record-breaking times. In this article, we’ll go over the benefits and drawbacks of Flutter, as well as talk about the most relevant use cases. And in this article, we will also consider these things. Like what is Flutter App and how App Development using Flutter Tools can help you to develop a successful product.

What is Flutter App Development?

Before going into detail about the advantages and weaknesses of this cross-platform technology, let’s try to find out the definition of Flutter app development. What is flutter and why is it so important for all of us to know about the Flutter app today. Simply put, Flutter is the only open-source technology used by Google to develop mobile, web, and desktop applications through a single code that can be used for multiple platforms. The technology is a goldmine for cross-platform app development because it is not a library or framework that is used in addition to other technologies, but rather a UI Software Development Kit (SDK).

Flutter is often compared to other languages and frameworks, such as React Native, Xamarin, and even Kotlin. An SDK is a set of different tools, including libraries, frameworks, documentation, APIs, etc., that are sufficient for developing a fully functioning application.

If you are a new app developer, you must be wondering how to create apps or launch apps for Android and iOS. And how to develop applications for both iOS and Android platforms at the same time and also save time? So with Flutter, you get access to simple cross-platform mobile app development tools that are designed to save developers time and reduce the headache typically associated with developing two apps at once. Which makes your job a lot easier, with one codebase for both platforms.

When it comes to mobile app development, speed is the name of the game. For developers, here’s how Flutter hits the mark: Any changes in the code are immediately visible in the app. Flutter calls it “hot reload” and defines it as follows: Flutter’s hot reload feature helps you quickly and easily experiment, build UIs, add features, and fix bugs.

This is a matter of concern for all the developers, as they have to write different code for all the platforms. But with Flutter, you won’t get to see the code you’ve developed remains the same even if it’s running on older versions of Android and iOS. And it’s a good thing.

Developing one codebase instead of two is a clear advantage. Shorter development cycles, fewer developers, as well as less complexity, will result in savings of money. As a result, you can create apps for both Android and iOS platforms in no time.

Apps developed with Flutter are guaranteed years of support from Google as the company itself uses the technology. You can be sure that Google will continue to fix bugs, release new versions and contribute to technology as much as possible. Flutter app development is involved in several Google projects like Google Fuchsia, proving that Flutter will be around for a long time.

As we learned, Flutter performs better than most frameworks with 58 fps. High performance is crucial for a successful app, especially for the gaming industry. Games need to run smoothly and fast, Otherwise, users will not use the apps you have created. Flutter app development has proven to be a great option for building high-performance gaming apps as well as implementing innovative AR features.

On-demand application development is one of the most popular industries for app development. Especially during the pandemic, people used to shy away from going out and buying food, medicine, clothes, etc. This has led to an increase in on-demand app development. Flutter app development offers native performance, exceptional design, and a great user interface, making it the go-to technology in the market.

Flutter application development gives you better flexibility to edit photos with a more advanced interface for photo editing. With more people having accounts on other social media platforms like Instagram, it is almost necessary to get a simple tool to polish the pictures they post. And Flutter is the go-to tool for developing easy-to-use apps with essential features.

Flutter application development helps businesses build native-like apps on a small budget and launch them on both Android and iOS operating systems simultaneously. We choose Flutter as our primary technology in application development. We being the Best Flutter App Development Company, are available to help you achieve your business goals and build the best app for your purposes.

Also, now you know how easy it is to build an app using Flutter. If you are looking for the right technology partner to develop your app with the help of Flutter technology, then you can contact Appic Softwares. It is known as the best mobile app development company in many countries like the USA and India and has many years of experience in developing mobile applications. We have an expert app development team who have successfully built many apps.

If you have your own business and you want to make an app for your business then you can contact us without hesitation.