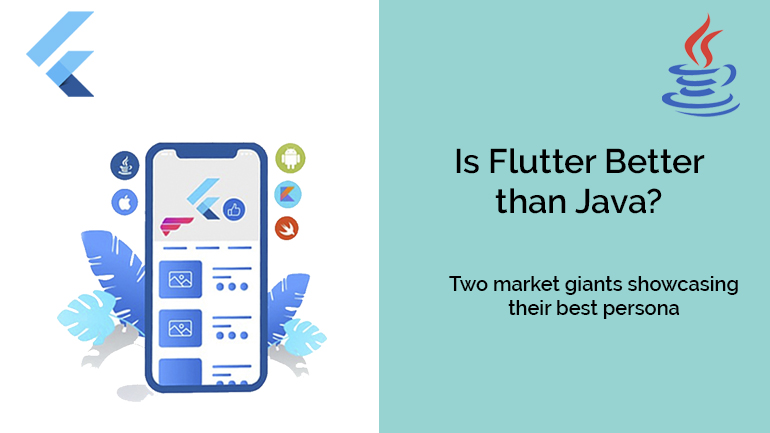 Ever since technology has evolved and various other dimensions are introduced the development process is getting pace in the competitive market. These new Flutter or Java frameworks are evolving with time and reducing future complexities through their advanced features for better mobile solutions.

Among various mobile application development frameworks, Java and flutter are the two market giants that captured the major share. Java is older than flutter. Both are working best in their domains. But the question arises if anyone is perfectly working then why do they need for others to arise. Let’s find out what these frameworks are and how they work differently.

Flutter is Google’s in-house framework that uses Dart language to develop native applications. The toolkit of flutter is developer-friendly and is considered by developers as it is fully customized and has native features. Flutter’s open-source SDK framework designs applications for all platforms whether it is iOS or Android or Linux or Windows or any other. Flutter is said to be the future of app development as it performs 60 frames per second. It works on a single codebase and a responsive UI.

Java is an object-oriented language for the web, mobile, and desktop applications. It was developed in 1995 in Sun Microsystems by James Gosling. Java is one of the oldest frameworks which came into existence way more prior than other development frameworks. It computes all the web and mobile solutions. Java is preferred because of its robust libraries which make the development faster and secure services. It can also run on JDK, eclipse, etc. Java develops vibrant e-commerce solutions, mobile applications, games, internet programming, etc.

Major differences between Java and Flutter

Flutter develops cross-platform mobile and web solutions with its native interfaces and responsive UI. Though, as Java is one of the oldest sets of development processes, it uses a set of instructions which are known as codes or programs which mainly develop cross-platform applications.

The particular benefit of Flutter over Java is its hot reloading feature. The hot reload in Flutter helps in quick experiments of the tasks, to build interactive UI’s and fix bugs. The changes are easily accessible. But in Java, it sets time while the developers work on it.

In flutter, an impressive material design is available backed up with open-source code which helps developers to easily build high-quality outputs. These material designs are elongated with customized widgets. But in Java

Material is an adaptable design system, backed by open-source code, that helps developers easily build high-quality, digital experiences. There are all kinds of Material design widgets in flutter be it buttons, expanding panels, animations, and much more.

Java is around two decades old, a programming language, and is restricted to that. It is widely used due to its popularity but in terms of including modern aspects it lacks. In comparison to flutter Java is popular among developers but lacks in providing great frontend and UI designs.

Java and Flutter work extremely well in their domains. But the major difference between both is the period. Flutter is the new generation’s choice and Java has its fanbase. Though, we know the market works on something new and divergent. But it also works on the need. Go with the needs of your project.

Flutter is a native cross-platform toolkit that works faster and impressively. While Java is safer due to its documentation, strong team, and continuous updation. Although, various other frameworks are also available for all development these two are most popular and demanded among them

We care for your needs. Appic Softwares develops on all the frameworks whether it is flutter or Java or any other. You just need to contact us for the best experience.