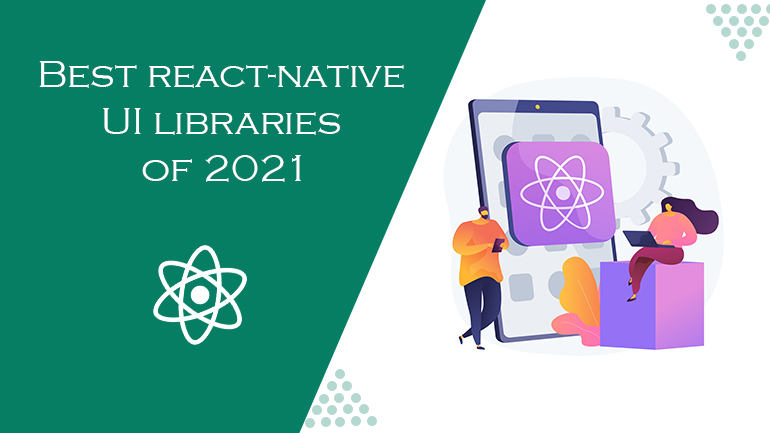 We bet your day doesn’t pass without looking over an Instagram post or checking out on Facebook. It simply states the top-notch applications that have been a part of our daily life. Did we have seen any failure in these applications or any stopping point, these run so fluently and frequently that we never found any hindrance. But did we ever think about how we never get any interruptions while using or which technology is used to develop these apps?  The applications such as Instagram, Facebook, Skype, Shopify, Pinterest, and Uber were built with user-friendly and eye-pleasing programming systems – they were developed with React-Native, a cross-platform framework used to make engaging React-Native UI. In this blog, we’ll look into React-Native features and see the top React-Native libraries for UI, which will help you and your team to develop the best applications for your future projects.

React-Native is a mobile application framework used to develop cross-platform applications. It was made in 2015 by the tech giant Facebook. The applications made through React-Native are portable for all the platforms such as iOS and Android. This framework is appreciated all around due to its all-over performance and impressive libraries. The libraries of native have won the hearts of developers as it made it easy for developers to work.

React-Native segment libraries can be a  time-saver and efficient for your next projects. Ordinarily, while building segments in React, you’ll need to style them to fit the guidelines of the platform you’re focusing on. That is where React-Native works as the best assistance. It’s a platform you can use to foster versatile applications by utilizing React alongside the native abilities according to the targeted platform.

Let’s look into the best React-Native libraries of 2021

If you are rewriting codes for different platforms then do it with React-Native as it has a dynamic front-end framework. The library is an assortment of cross-platform React-Native elements and is a decent platform to begin building your application.

NativeBase is completely open-source and has 13,000+ stars on Github. Though, the themes even come at a premium in case of having additional features. Working with a similar JavaScript codebase and performing tasks with a platform-specific design for both; Android and iOS, you can accomplish a native look and let your app justify itself.

Material Kit React-Native with its material design offers a free native application template Built with the Galio framework, it helps in modifying the widely recognized elements to keep things negligible and be on top of Google’s material design. It’s not difficult to use and incorporates 200+ carefully assembled components like cards, navigation, buttons, and inputs. By changing the theme one can add more colour variations on components according to the designs.

React-Native Elements are a cross-platform React-Native UI toolkit that assembles in one spot with various incredible open-source UI elements developed by developers.  It’s not shocking that it has gotten 17,000 stars on Github. Because of the set of  React-Native Elements provides API a steady look and feel. The elements include segments such as pricing, overlay, divider, badge, and a platform-specific search bar. These are customizable and easy to use. It has React-Native for the web for web-based projects.

Lottie is a library from Airbnb for mobiles to assist you to add animations to your application. Though, many times developers find it difficult to convert the designs made on Adobe after effects. This library is usually helpful in converting format. It works by exporting the animated files in JSON format from After Effects. On Github, it has around 12,000 stars. The best part about this library is that it is available for free. Through this one can develop the application to be attractive and interesting.

This is one of the best React-Native libraries. If you’re searching for icons to use in your application then this is the best. With a library of 3,000+ Icons, one can discover the icon according to their requirement. Likewise, it’s customizable, style, and extends the icons according to the need of the project and the design.

This library supports TabBar and Toolbar Android, image source, and the various multi-style fonts as well. This library is also close to 12,000 stars on Github.

This library offers map components for Android and iOS as React-Native Mapview. This controls the features of the map to help in assistance in the application by featuring a map option. One can modify the map style according to the requirement. You’ll have the option to change map view position, find district/area, track, etc. The amazing thing about this library is that it has draggable markers even customized with the use of images. It has 10,000+ stars on Github.

This React-Native Library helps in developing e-commerce mobile applications. This is one of the most vibrant kits that can be used in the development of any domain. It offers more than 20 specialized components styled to keep the visual appearance stable and attractive. It has 5,000+ stars on Github. It is an open-source library, provides differentiated themes to work on, and is customizable which means themes can be added anytime. One can install it from NPM and start working by importing the components.

Build your Apps with Appic Softwares

React-native works exceptionally well by providing libraries that are user-friendly and help developers to build mobile applications best. Appic Softwares has a team of the best React Native developers working on various successful projects. Work with Appic softwares for the best experience!